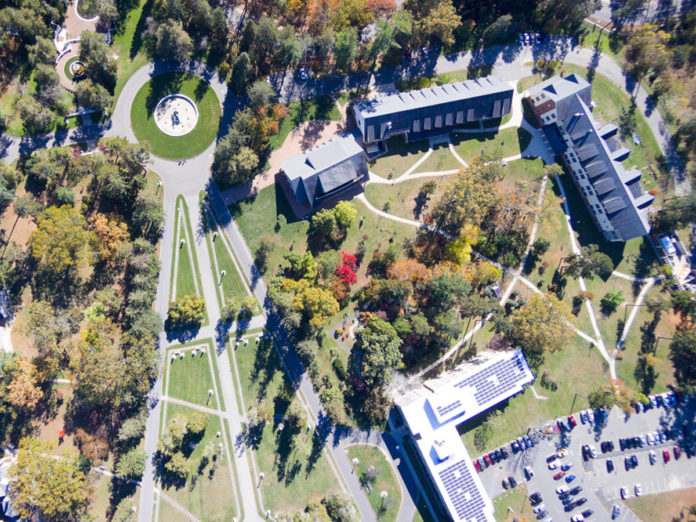 Since its founding in 1908 as an all-women’s educational institution, Georgian Court University has been a trailblazer of opportunity for women. The university became coed in 2012, but its legacy of women’s leadership laid the strong foundation that makes GCU what it is today.

“While higher education generally provided what was then called ‘a chilly climate for women,’ at the time of its founding, Georgian Court College was quite the opposite,” Mary Chinery, dean of the School of Arts and Sciences, said. “Georgian Court had women in every key leadership position — president, deans, department chairs and more.”

Sister Barbara Williams, who joined the university as registrar in 1960, said, “Women really ran the place for a little over 100 years, and I think we did a pretty good job.”

Williams went on to become president from 1980 to 2000. Over those two decades, she increased the university’s endowment from $200,000 to $32 million. Today, the university is still reaping the benefits of her hard work as this money is reinvested into the Campus Master Plan, including a new Nursing and Health Sciences building, upgraded residence halls and more.

Presently a coed Catholic institution, Georgian Court still sets a high standard for women’s leadership in higher education. Today, 100% of GCU’s deans are women. Nationally, only about half of higher education administrators are women. The university reached this milestone in July, when Kelly McNeal became the dean of the School of Education.

Over half of the administrators on the President’s Leadership Council are women, and many top positions are held by women, including provost, director of DEI initiatives, director of career services, director of financial aid and director of global education.

“The work environment at GCU is very supportive. I never feel like I have to censor myself or like I’m going to be judged for giving my honest opinions,” McNeal said. “When I needed the institutional backing of the provost to apply for the Certification of Eligibility with Advanced Standing pilot program, she immediately said yes. It’s a pleasure to work for an institution that says ‘yes’ because they trust me and my abilities.”

In her new position, McNeal has also helped establish a School of Education Welcome Center, where students can go for information they need about undergraduate and graduate studies, alumni resources, student teaching applications and more.

Jennifer Edmonds became the dean of the School of Business & Digital Media in 2019. Since then, she has completely revamped the school’s mission statement and strategic plan and accomplished about 85% of the goals she laid out during that process.

“The unique thing about the GCU community is that we really want to get to know each other’s strengths and weaknesses to learn how each individual can contribute to the team,” Edmonds said. “At the end of the day, gender shouldn’t matter. If you’re on the team, you’re on the team. There is equity in that your gender doesn’t matter as long as you can do the job.”

While an increasing number of college graduates are women, the number of women in university administrative positions remains relatively small. The deans at Georgian Court hope to instill confidence in the next generation of leaders who could change that: their students.

Teri Wurmser, dean of the Hackensack Meridian Health School of Nursing and Wellness at GCU, was the founding chair of the school. She recognized a need for a bachelor’s program in nursing, as none existed in Monmouth or Ocean counties. Since then, she has started a direct-entry master’s program and opened the school to other studies, including social work, integrative health and exercise science.

“The success of a program is reflected in its graduates, and at Georgian Court, we’ve always been very studentcentric. The students that come out of the School of Nursing and Wellness go on to be leaders in their field,” Wurmser said.