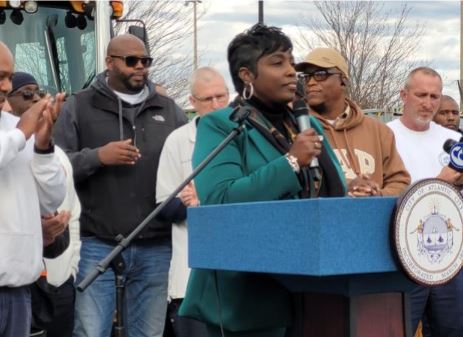 Atlantic City Public Works formally introduced Crystal Lewis as the city’s new director of the Department of Public Works recently. Lewis is the first woman to hold this position in the city.

Lewis, an Atlantic City native, had been serving as assistant director of public works for the city for the last seven years. She joined the city of Atlantic City mayor’s youth program at the age of 14 in 1983 and has worked for the city her entire professional career. Her first City Hall job was in the clerk’s office 34 years ago. She has also worked in Vital Statistics, the Division of Planning and the Engineering Department. Lewis has been working in the Department of Public Works since 2005.

“I’m excited to finally be able to put my fingerprints on this department and set my thoughts and ideas into motion as director of public works,” Lewis said. “The people of Atlantic City can rest assured that any decision I make will be with the city’s best interest in mind, and I will handle any issues and complaints that come my way in a fair and aggressive manner. I offered everything I could as an assistant, and will not stop now that I’m director. I’d like to thank Mayor (Marty) Small for seeing something in me and allowing me this opportunity. He has been nothing but supportive of myself and my department since he took office.”

“Crystal is a true example of upward mobility in the workplace at its finest,” Small said. “Her career with the city started under Mayor James Usry, Atlantic City’s first black mayor, and continues today as the leader of public works under my administration. This is a historic moment. I’m proud to make her the first female director of public works. Not only is she a female, but an African American female, someone children can look up to and say, ‘One day, I want to be like her.’ The people of the great city of Atlantic City are in good hands.”

Lewis replaces the previous director of public works, Paul Jerkins, who retired at the end of December.