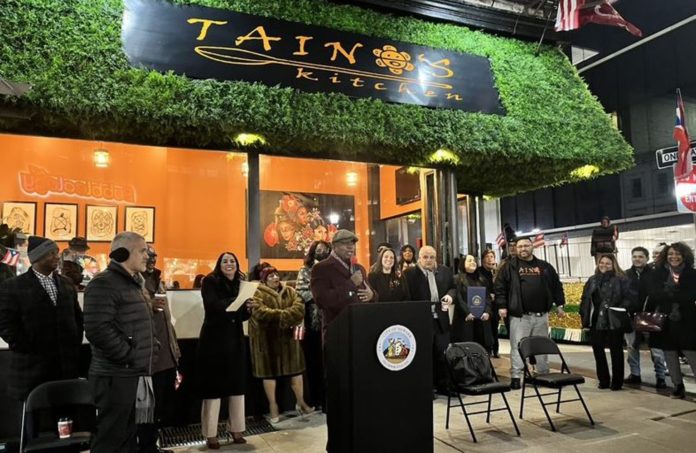 Taino’s Kitchen, a family-owned Puerto Rican restaurant that has operated since 2014 in the North Ward of Newark, has now expanded to Downtown Newark with its second location, at 85 Halsey St. on the corner of Halsey Street and Linden Street. Taino’s first location is located at 849 Mount Prospect Ave.

Signature dishes at the restaurant will be mofongo and traditional appetizers such as alcapurrias, empanadas and relleno de papa.

At a ribbon-cutting ceremony earlier this week, attendees were treated to tastes of Taino’s Kitchen’s signature dishes and music. The event was attended by Newark Mayor Ras J. Baraka, Deputy Mayor for Community Engagement Jacqueline Quiles and Invest Newark CEO Marcus Randolph, among other community partners and supporters.

“We’re super-excited to bring Taino’s Kitchen to the heart of Newark. It fills our hearts with much pride to share a piece of Puerto Rico with downtown Newark and showcase our roots, culture, pride and, most importantly, our authentic flavor with Taino’s Kitchen restaurant. As a young Latina entrepreneur, I feel blessed to open Taino’s Kitchen,” Mayttee Cordero, owner of Taino’s Kitchen said.

“Taino’s Kitchen already represents the culinary talent, business expertise and entrepreneurial spirit of our city’s Puerto Rican community at its original site,” Baraka said. “The restaurant’s expansion to our downtown will add to its luster as an attraction to visitors and enhance the neighborhood’s economy. I congratulate the family on opening this new location. I look forward to the positive impact that the new Taino’s Kitchen will have on our city as a whole and our downtown in particular.”

“Today we celebrated the success story of a Newark resident and business owner reaching a milestone — opening a second location. We celebrate their investment in Newark, and wish them much success in the new year,” Randolph said.