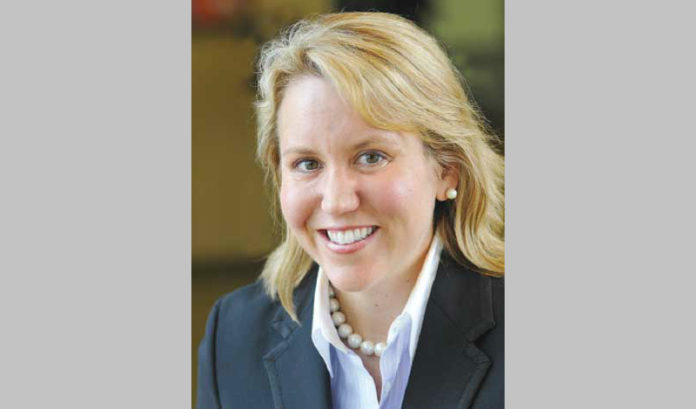 Anna Maria Tejada didn’t know what to expect last May, when the Executive Women of New Jersey brought back the in-person version of its annual event that salutes key female leaders in the state.

As the president of the group, one who had helped it survive — and still thrive — during the COVID-caused Zoom efforts, she was eager to get back in person for the group’s Salute to the Policymakers event.

“That’s when our ability to meet and network really comes alive,” she said.

Tejada, however, didn’t know how many others felt that way. She got her answer.

The event drew more than 300 and helped EWNJ solidify its place as one of the top female-inspired groups in the state.

It’s a moment that Courtney McCormick, who served as the chair of the event and took over as president of EWNJ at the start of the year, points to as a launching-off point that provided a vision for the future.

“That event really unleashed a lot of energy,” she said. “Right after that, we had a number of events and gatherings where we started seeing more and more people come.

“And what was just so exciting was people really wanted to be there — and the conversations that we were having when we were there were really important.”

EWNJ has long been known for three things: 1) Providing a place where female executives and leaders can discuss key issues and develop strategies; 2) Raising money to support the next generation of female leaders, with a strong leaning toward assisting those from underserved communities, through scholarship opportunities; 3) Using its biennial “A Seat at the Table” report to highlight which N.J. companies have strong female presence in their leadership group — and the metrics that show how those companies are benefitting by doing so.

Courtney McCormick, the new president of Executive Women of New Jersey, said diversifying the organization’s influences is a key to growth. That inclusion, she said, means not only more women of color, but men, too.

She points to past success with the group’s influential biennial report, A Seat at the Table, which tracks the presence of female leadership at New Jersey companies.

“We’ve also had input from a variety of leaders — male, female, people of color,” she said. “I think that is really important, because if a bunch of the same people get in the room and start talking about the same thing, and the same issues they’re facing, what is gained?

“What I really have appreciated, quite candidly, are the discussions we’ve had on our very diverse board,” she said. “I’m a white woman and have my own experiences. Talking to our board members with different backgrounds breaks down barriers.”

McCormick said hearing from male leaders is important, too.

“It’s great to hear from a female CEO, but it’s just as good to hear from a male CEO and their experiences — and for them to hear from us,” she said. “It’s a matter of getting people into the room together, because, once folks are in the same room, I think some really incredible things really start happening.”

“Anna Maria did an amazing job of keeping the organization moving forward during the pandemic,” she said.

Because of that, McCormick feels the group now is positioned to expand not only its membership, but its influence and impact. She listed the following as the main objectives for 2023:

McCormick said remaining focused is the key — because the goals and aspirations are reachable.

“Quite honestly, it need not be that complicated,” she said. “Sometimes, just getting the right people together in a room is just so powerful.”

One thought is to have more focused events or gatherings on a specific industry, like energy, real state or construction, health care, tech or finance. The possibilities are there, McCormick said.

This belief follows one of the leads of Tejada, who aimed to increase the exposure and influence of the group by having others bring in new leaders from their own personal networks.

“We’re an organization that prides ourselves in supporting one another through networks,” she said. “We all have such powerful personal networks; we need to tap into them.

“That was a little hard to do in the pandemic, but we did the best that we could virtually. I’m very excited for the fact that we were able to come back to a lot of impressive events this year.”

While the networking is important, both Tejada and McCormick said tackling the key issues that female executives face always will be a top priority.

“We also have to continue to advocate for issues that are important to women, such as pay equity. While there has been some progress, the pandemic took us a few steps back.

“I think it’s important to continue to have that conversation about women in the workplace, making sure women are successful, making sure that they are receiving proper pay for the services and what they bring to the table.”

Tackling these issues is a challenge. That’s why McCormick said she has another big goal for 2023: increased partnerships with like-minded organizations.

“We don’t need to do this alone,” she said. “There are so many organizations with aligned visions and focus, we need to think about how we might partner with them. These are conversations that we’re already having.”

For small MWDBE firms, a lesson in procuring work from N.J.’s...