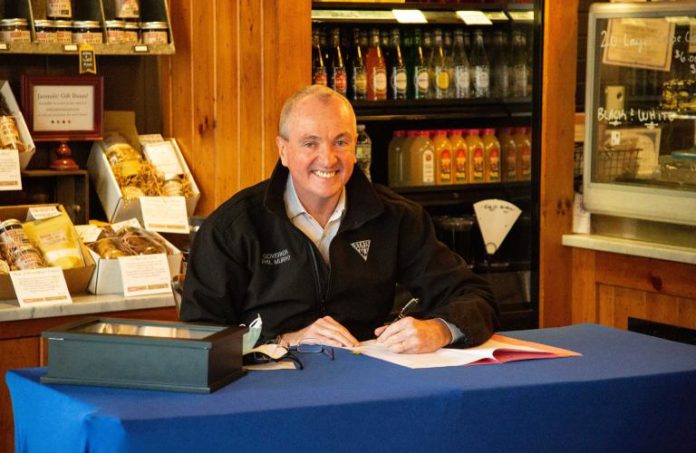 Murphy gets positive ratings from 84% of Democrats and 46% of independents, although just 16% of Republicans approved of the job he’s doing.

“Murphy seems to be holding course,” Patrick Murray, director of the Monmouth University Polling Institute, said in a prepared statement. “His rating is above water in a state where Democrats have a registration advantage, but he doesn’t seem to have broken through yet with a major legacy item that New Jerseyans point to as a hallmark of his administration.”

The public is split, meanwhile, on whether Murphy is more concerned about his own political future or governing the state, at a 45-44% divide, respectively. About 4 in 10 expect a presidential run, with 7% saying he definitely will seek higher office and 33% saying he probably will. However, just 32% of those polled said he would make a good president, including just 54% of Democrats.

“I think part of the low expectations for Murphy on the national stage is that there isn’t an obvious job opening in the foreseeable future,” Murray said. “The same can’t be said for Christie, but still, most New Jerseyans seem to think his disappointing 2016 run should have been enough for him.”

Only 35% of New Jerseyans think the Republican former governor will run for president again, and only 20% said he would make a good president.

In contrast, 65% expect another Booker campaign, while 41% think he would make a good president.

“One of the differences between Murphy and Booker is that Booker has stayed on the national stage after his 2020 run, and there’s a natural inclination to feel that a senator has his eyes on the White House,” Murray said.

The poll was conducted by telephone between Jan. 5-9, surveying a total of 809 New Jersey adults. It had a margin of error of +/-4.7 percentage points.

Inside the GSI Report: Conn.’s fiscal crisis is cautionary tale for...

Murphy on $15 minimum wage: I have my signing pen ready...