Home Politics New incentives for remote workforce? What Murphy’s comments do (and do not)...
Facebook
Twitter
Linkedin 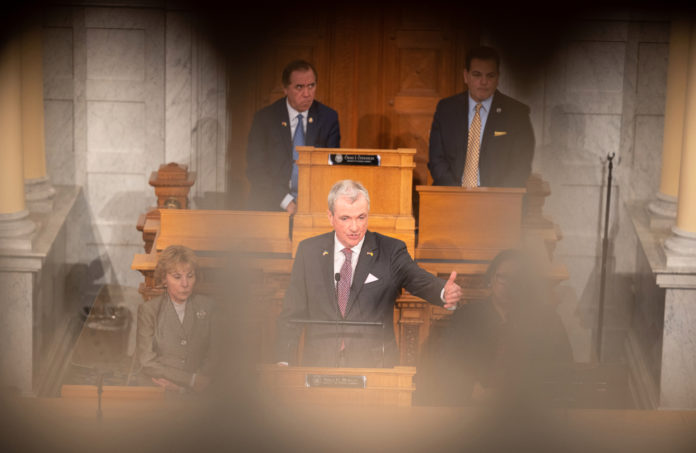 About that intriguing but vague incentives comment by Gov. Phil Murphy during his State of the State address Tuesday — the one where he said the state must make a “necessary update” to accommodate the new reality of remote work.

It might be easier to define what it is not.

Here’s what it could be.

Another potential tool in the incentives toolbox — to use the favorite cliché of economic development professionals.

A way the state could use incentives to help economic centers (again, often urban areas) in a variety of new ways (think money for parks or other public spaces that draw people).

And it could be a way for New Jersey to take the lead in the incentives game — something that potentially could have other states in the Northeast, if not the U.S., looking to N.J. for examples of how the game works in a post-pandemic world.

That’s the way Tim Sullivan, the CEO of the New Jersey Economic Development Authority, sees it.

He broke down how he interpreted Murphy’s comments. Here’s a look at the conversation.

ROI-NJ: Everyone was intrigued by the governor’s tease regarding incentives that address the hybrid/remote nature of the work world. As someone very much involved in the state’s wants and goals, what insights can you offer?

Tim Sullivan: I think the important thing to bear in mind here is that the governor is describing a potential new program that’s a companion to Emerge. We still very much want companies that are thinking about coming to Jersey to come to our cities to make big capital investments — we still very much want that. But it’s a recognition of the reality of where the market is right now in terms of remote work.

So, it’s not a replacement for an Emerge award. Nor is it letting folks who have existing deals change their deals. Fundamentally, it’s a companion piece to that.

TS: We know there are companies, some are in New York and Philly and others are around the country, that are hiring lots of remote workers — we want them to hire people who live in New Jersey. In some cases, they probably will take some small office space close to where their employees would work, so folks could come in for a day or two. But, as long as the companies are paying payroll taxes in New Jersey, it should be a winner for them and the state.

And then, for companies who have remote workers — someone who hasn’t been to their office in New York (or Philly) in three years but is still being tagged as a New York worker — this would be an opportunity for the company to reclassify those workers in New Jersey. This might be a reason for them to take that leap.

This could be good for our cities, but our suburban office space as well.

ROI: What types of companies do you see this attracting?

Or, maybe, it’s a company that’s in New York or Philly which has said, ‘We’re never going back to the city in the same way, let’s have a smaller space in Jersey with a bunch of remote or hybrid workers.’

ROI: It’s a potential incentive program for hybrid or remote work — but it still has a connection to physical space. Give us more on that.

TS: Like so much of this, it’s still to be determined. But, yes, there probably will be some physical space needed.

My sense of the general opinion in the administration is that remote work is here to stay, but hybrid work is really the name of the game. Most companies are still looking to get people back to the office from time to time for in-person gatherings and big meetings. So, the idea that you are never ever going to be in the same building as your colleagues, I think, is going to be rarer than hybrid work.

So, the idea is, if some company in New York City or Philly says, ‘We have 100 people in New Jersey and we can’t drag him back to the office, let’s have some space in Jersey, a small office, where they can go, and we can call them Jersey employees.’

ROI: How will you know they are ‘Jersey employees’ if they essentially are working remotely? How will you verify companies are doing what they are doing, which obviously is a key to any award? There seems to be a potential for abuse here.

ROI: How would companies benefit?

TS: The idea is they would get some portion of those taxes back. But, again, all this is very early stage. We’re going to need to work with the Legislature to figure out something that works together.

ROI: It sounds like, however it is created — if it is created — it will be a greater ‘incentive’ than anything any other area in the region is offering, putting New Jersey ahead of the curve.

TS: Correct. If you’re in New York City, and you’re thinking about Westchester or Long Island or Connecticut or New Jersey, right now, all of our incentives have in-person requirements. We all want companies to make that capital investment, create construction jobs — so, we’re still going to market the hell out of those programs. This is a potential companion program that no one else has.

ROI: The governor also briefly teased an idea that incentives could be tied to public spaces, such as parks. Give us insight into that potential part of this?

TS: I think it’s really important that anything that gets done here needs to be accompanied by some commensurate investment in our cities, because remote work and hybrid work — any way you slice it — is not great for the Newarks and Jersey Citys of the state. Even if people are in three days a week, that’s 40% less time to go to restaurants and small businesses. So, if three-days-in, two-days-out ends up the permanent reality for most people, that’s still not what you’d like if you’re thinking about the city perspective.

We need to make investments in making our cities more dynamic and attractive for people to be in for a lot of reasons, not just for work, but for living or playing or hanging out. So, urban parks and plazas. And he didn’t say it explicitly in speech, but things like more housing or mixed-use retail — supporting arts and culture. All of that is in the mix.

TS: This isn’t something that we’re doing in the next month. This is a long-term vision. And this certainly would require partnership with the Legislature.

ROI: And it clearly isn’t a replacement or adjustment for the Emerge program.

TS: I think there is an initial misunderstanding on that. This is not making permanent the bill signed in December that basically gave a one-year extension on the pandemic accommodations for remote work. This is not that.

It’s part of the same sort of thought process, which is that hybrid work is here today, but it’s not making that permanent or changing the deal for people historically.

N.J. hospitals come together to provide supplies for counterparts in India