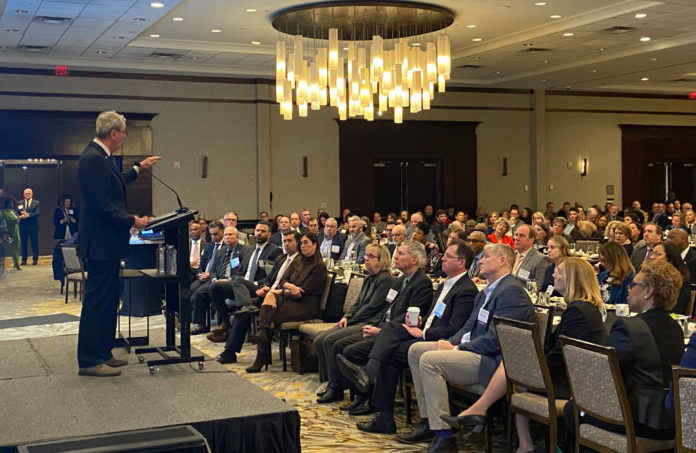 At the end of what appeared to be a basic business chamber address — one in which he repeated many of his thoughts from his State of the State address the day before while praising the work of those in attendance — Gov. Phil Murphy offered a surprisingly blunt assessment of what lies ahead for New Jersey during a time of rising interest rates and the likelihood of some level of a recession.

To be clear, Murphy indicated he felt the state was in a position to handle the upcoming challenges — it would have been surprising if he didn’t.

But the level of detail that he gave — including a reference to the more than $1 billion of unspent COVID-relief funds — surprised a crowd that was used to hearing stump speeches.

Murphy, speaking Wednesday at the Chamber of Commerce Southern New Jersey event in Mount Laurel, said he wanted to close by giving “a cold-blooded assessment of where I think we are — and what are some of the twists and turns in the road that we might be facing.”

“We all have to accept the fact when the Federal Reserve raises interest rates at the clip that they’re raising them, and (when) we’re dealing with real inflation and affordability challenges that we haven’t seen in 40 years, not only do we have to acknowledge that there’s pain at the kitchen table, but it’s axiomatic that the economy is going to slow down,” he said.

“What’s around the corner is what we have to be concerned about.”

Murphy said the state is not facing the issues that are coming in California, where Gov. Gavin Newsome announced this week that the state is facing a budget deficit of $22.5 billion.

“We haven’t seen it yet in our revenues at the state level,” he said. “But that does not mean we’re not preparing for what will be thin ice.”

“We have a massive surplus, we’re reducing our indebtedness, we’re delivering relief, as best we can, first and foremost through property tax relief to ease the pain at the kitchen table,” he said.

Murphy then referenced his career at Goldman Sachs, something he rarely does (it makes up just two sentences of his biography on his official web page).

“I’m a recovering banker,” he said. “One of the things you realize in markets (is that) some things are beyond your control.”

The state, he said, can only do so much when it comes to supply-chain issues and the war in Europe. Instead, it must work to outperform others, as the state recently has been doing.

His prediction: a meaningful, but shallow, short-lived recession.

“Part of the reason I believe that is that there’s an enormous amount of liquidity on the sidelines,” he said.

Murphy noted that the state has $1.4 billion of unspent American Rescue Plan money and the largest surplus in state history. He said $12 billion will come to the state through the infrastructure bill — and untold millions more from the Chips Act.

Murphy said the rise in interest rates — while a cause of pain — will help reduce inflation.

“There’s no question about that,” he said.

Murphy also said there’s no question the state is not facing the same issues it faced in 2008.

“We’ve modeled the 2008 recession … and I don’t think it’s anywhere remotely that challenging,” he said.

It’s why, Murphy said, he sees a difficult but bright future.

“On the balance between a lot of optimism and some concern …  I think I can count myself as never having been more optimistic for the future of our state,” he said.

Afterward, Murphy’s openness on the issue was the talk of a room that featured more than 300 business and government leaders.

Not everyone was convinced he was right, but seemingly all said they were thrilled to hear him speak so candidly.

Oroho: Businesses should be able to open now