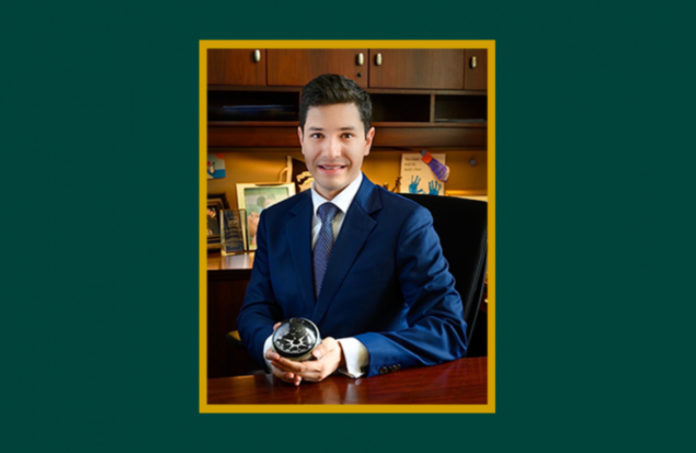 Andy Acebo, who came to New Jersey City University two years ago to serve as its chief of staff — and then helped lead its restructuring efforts during a period of dire financial pressures that continue to this day — will be named interim president of the university later Friday morning, ROI-NJ has learned.

Acebo succeeds Jason Kroll, who has served as acting president since longtime President Sue Henderson stepped down in late June amid the financial crisis.

Acebo’s role as interim president will be different than that of Kroll, who was entrusted to handle the day-to-day operations during the crisis. Acebo has agreed to serve in the role for two years — furthering his efforts to right-size the university and prepare it for a stronger future.

In many ways, Acebo is a nontraditional selection for the role. He is just 36 — and, while he is considered a rising star in legal circles, where he had a focus on higher education among other areas, he had never worked at a higher education institution until he came to New Jersey City University in February 2021.

In other ways, Acebo is an ideal candidate for the job.

He is the son of Cuban immigrants and was raised in a working-class household in Union City, where he was the first member of his family to go to college — all are characteristics that define many of the school’s approximately 5,500 students.

NJCU, which has students with backgrounds from dozens of countries, primarily is a Hispanic-serving institution. The median household income of its students is $42,000, by far the lowest of all the four-year public schools in the state. The majority of its students are the first in their families to attend college.

Acebo did not attend NJCU, but his connection to Hudson County is strong.

Acebo grew up in the same section of Union City where U.S. Sen. Bob Menendez was raised. After graduating from Union Hill High, Acebo went to Brown University, where he earned degrees in international relations and comparative literature. He earned his law degree at Rutgers Law School – Newark in 2011 before clerking for the Appellate Division of the Superior Court of New Jersey.

Acebo’s connection to NJCU runs deep, too. Both his wife and his mother-in-law are graduates of the school. In fact, it can be said the two attended the school at the same time. His wife, as a toddler, often came to class with her mom, a single working mom. Child care needs are a reality for many of the school’s present-day students.

Acebo came to NJCU from Paramus-based DeCotiis, FitzPatrick, Cole & Giblin, where he was a partner.

His practice focused on the representation of public entities (e.g., municipalities, county government, public school districts, county colleges and independent public authorities) and closely held businesses in the areas of labor and employment law. A significant portion of legal practice was dedicated to the areas of education law and local government law.

Acebo, who has an energetic and engaging personality, impressed the NJCU board as well as its faculty and staff with the personal and professional way he helped institute many painful — but necessary — financial reforms.

In November, the school eliminated three senior management positions on its executive leadership teams and consolidated its management divisions from six to four. The cuts were part of a 41% reduction of the management-level workforce at the university since the pandemic — from 125 to 73.

In December, the school announced it will reduce its academic portfolio by 37% by sunsetting 48 undergraduate programs, 24 minors, 28 graduate programs, 10 certificate programs and one doctoral program. As a result, up to 30 tenured faculty will receive notice that their position may be eliminated as of June 28. Additionally, the university will not renew the contracts of up to 19 nontenured, annually appointed faculty and professional staff for the 2023-24 academic year.

NJCU entered Fiscal Year 2023 with a structural deficit of more than $22 million — half of which was reduced before a single layoff, the school said. And, while Acebo’s primary goal will be to help the university reach budget neutrality by June 30, his ability to serve as the face of the university — both internally and externally — will be just as important.

Acebo, whose given name is Andres, is fluent in Spanish.

Kroll, who has served in various roles since coming to NJCU in the fall of 2017, will continue on in a transition role through early March.