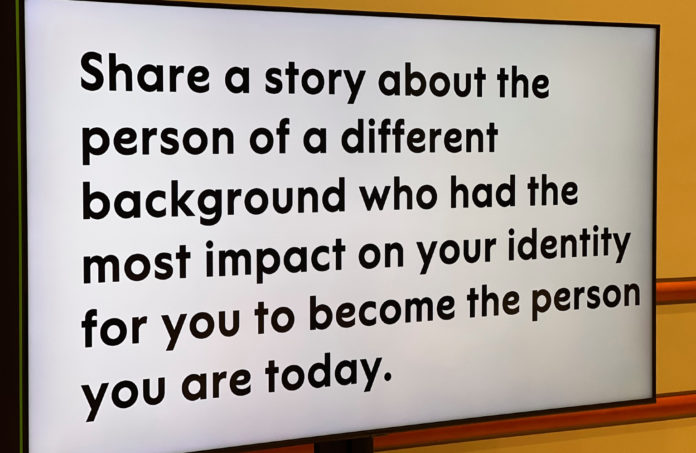 When racist, antisemitic graffiti was spray painted at Scotch-Plains Fanwood High School in 2018, local officials reached out to the Truth, Racial Healing and Transformation Center at Rutgers University – Newark to help address the hatred behind the vandalism.

The effort helped ease tensions, which had long existed in both towns, and resulted in heightened awareness of bias and discrimination. Since then, the center has held several “racial healing circles” in Scotch Plains and Fanwood, guiding participants to discover what they share with people of diverse backgrounds.

It has also worked with organizations and municipalities within Newark and beyond, in addition to holding workshops throughout all campuses at Rutgers.

“Racial healing is an opportunity where we engage in conversation and discussion of our humanity. And, when we engage in that conversation, we have made a connection with someone from a different race, ethnicity, gender, sexual orientation, religion, even political ideology. And that is when the healing begins,” Sharon Stroye, director of the center, said. “Race continues to be the biggest taboo for topics of discussions and what we do not want to talk about. But in the racial healing circles, we are connected in our humanity.”

This month, the center has planned many Rutgers-Newark signature events to honor Martin Luther King Jr. Day on Monday and the National Day of Racial Healing on Tuesday. The theme, “Redefining and Rebuilding Community,” explores how to reconnect after the isolation, distance and political turmoil of the past few years.

“COVID, the political rancor and divisiveness, that’s not who we are,’’ Stroye said. “I wanted to create opportunity for people to come together on their own without depending on our leaders or the media, to step away from everything we’re watching and as meet as human beings.’’

The center has collaborated with Creating Change Network and the New Jersey Performing Arts Center to highlight how the arts can foster learning and conversation about race. From Jan. 16-24, there will be an array of in-person and virtual community events, workshops, classes, panel discussions, performances, exhibitions and racial healing circles in Newark and other towns. The goal is to discuss and imagine a society of community and belonging, Stroye said.

“No matter who you are, what your background is, you can find something for yourself in any medium of art,” Stroye said. “It’s a space which brings diverse types of people together to enjoy, be inspired and be motivated.”

Events at Rutgers-Newark on Tuesday include an alumni panel discussing the diversity of Rutgers-Newark and how it shaped their view of community. There will also be a panel on racial healing within the legal system.

“We’re going to be talking about how you can transform the legal system into a place of healing and community building,’’ Stroye said.

All events will be livestreamed.

The Truth, Racial Healing and Transformation Center was established at Rutgers-Newark in 2017 and is one of 71 national community-based initiatives developed by the Association of American Colleges and Universities with initial funding from the W.K. Kellogg, Newman’s Own and Papa John’s foundations.

Although the center is involved in many events this month, its work conducting racial healing circles is ongoing and central to its mission. Stroye wants to dispel any perception that the gatherings are confrontational and designed to make participants, especially if they are white, feel guilty. Although misinformation is fact-checked, and participants are instructed to listen closely and be attuned to bias, the circles are meant to build bridges, she said.

“We always want people to feel safe and willing to share just a little bit about who they are,’’ she said. “This allows people to gain a perspective based on someone’s story. I remember someone whose parents were Polish immigrants saying, ‘I never would have thought that someone who is Latino could have a similar story to mine.’ We focus on culture and how people interact with those who are different than them. When they start sharing, it gives people a chance to hear how diversity has shaped their lives.’’

When the circle ends, it has become common for participants to pose for selfies together, exchange contact information and form lasting friendships. Stroye recalls racial healing circles at NJPAC when participants formed close bonds. She forged similar ties with former Scotch Plains Mayor Al Smith, a white Republican in a mostly white suburb.

“I am an African American woman, Democrat from Newark, New Jersey, and we came together because of this space,’’ she said. “We found commonality in terms of how we raised our children. We discovered our children went to the same private school in Summit. We both felt like they were being treated differently. In my case, because of race, and in his, because of class, since many of the students come from wealthy families.’’

The understanding that formed between Stroye and Smith was mirrored on a larger scale in Scotch Plains and Fanwood, where nearly 100 residents have participated in circles since they began.

“Being part of these circles over the years, I’ve never seen one where I haven’t made a bunch of new friends and gained a better understanding of the pain and discrimination felt by different groups,” Smith said. “It is a great service. I can only recommend that anyone attend.’’

This story was produced by the media relations team at Rutgers University – Newark.