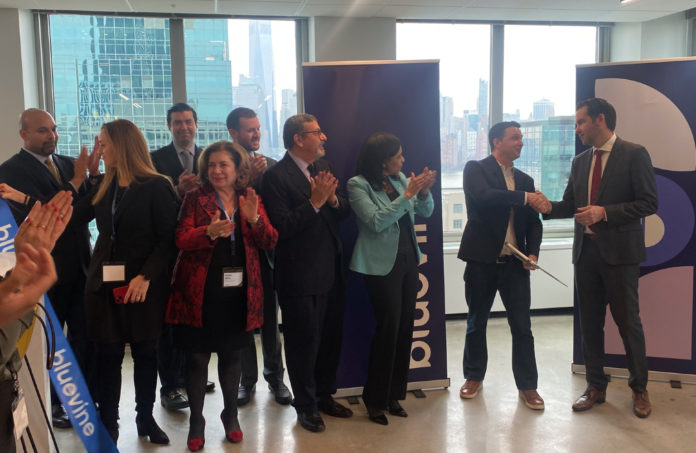 The ribbon-cutting last week that marked the move of Bluevine’s international headquarters to Jersey City meant the state was adding another fintech company — and potentially 200 more jobs.

This ribbon-cutting, however, was more than that. The decision by Bluevine, which was founded in Tel Aviv, Israel, to move its headquarters from California to New Jersey is another signal of the state’s ability to attract and grow Israeli-based businesses.

“We are very proud of Bluevine setting its international headquarters in New Jersey,” he said. “This is testament of the strong potential for growth for Israeli innovation to the U.S. market, as well as to the compatibility between Israel and Israeli companies’ needs and the state of New Jersey.

Bluevine, a global financial technology company specializing in small business financing, has provided small businesses with streamlined banking solutions built for them since launching in 2013.

Bluevine’s innovative and intuitive products, including business checking, bill pay and line of credit, have helped over 450,000 entrepreneurs save time and money so they can focus on what matters most: growing their business.

“New Jersey once again proves itself as a great location to set up operations that will support growth and pave the way for success.”

“I’m so proud of what our Bluevine team has accomplished thus far to support small business success and their continued growth,” he said. “We look forward to this next phase in Bluevine’s story and believe Jersey City and the state of New Jersey’s strong talent pool, top-tier universities and central location will be catalyzers for Bluevine’s future growth. We are thrilled to be calling Jersey City home.”

Bluevine officials said the company has doubled its office space footprint in New Jersey and is starting to explore additional expansion in the state.

Proximity to New York City and access to a vast talent pool were cited as the main reasons for relocating the company’s headquarters to the state.

Bluevine, which has had a presence in Jersey City since 2018 (approximately 125 staffers), will focus on building out the team in Jersey City. It recently opened a marketing department and research & development hub here, too.

Bluevine officials said they will be recruiting for a number of R&D positions, including full-time and paid internships, as well as positions in business development, business operations, commercial operations, finance, product, human resources and risk departments.

The company said it expects to recruit approximately 200 new positions with a preference and focus on sourcing talent in New Jersey, making this one of the largest single job announcements from an Israeli-founded company in New Jersey history.

Those numbers certainly caught the eye of Andrew Gross, the executive director of the New Jersey-Israel Commission.

“New Jersey is setting the bar when it comes to the growth and expansion of Israeli companies into the United States, as we continue to welcome innovators like Bluevine who are creating jobs and building our economy of the future,” he said.

“Our office is committed to attracting top talent from Israel and working with our partners in government to keep delivering and ensuring that Israeli businesses are warmly welcomed in the Garden State,” they said in a joint statement.

The relocation of its headquarters to Jersey City validates and strengthens the relationship between the two states and serves as yet another example of the strong bridge between the “Start Up Nation” and the “State of Opportunity,” New Jersey officials said.

“I am proud to celebrate the expansion of Bluevine as we show yet again that New Jersey is on the cutting edge of innovation and a beacon for the global business community,” Secretary of State Tahesha Way said.

Gov. Phil Murphy was thrilled, too. He sees the move as another example of the state’s outreach paying off.

“This administration has worked tirelessly to build an environment where companies can thrive, and, due to that work, we are now witnessing an influx in companies putting down roots here,” he said.

Much of that outreach has come through Choose New Jersey, which has made four economic mission trips to Israel in recent years.

“Bluevine will find no better home in the United States than right here in the Garden State,” he said. “We thank Bluevine for not only being a member of the New Jersey business ecosystem, but also for its commitment to supporting and being a trusted financial partner to small business owners. The services that Bluevine offers certainly help to grow and expand the state’s economy.”

Cannabis is now available to everyone. What does that mean for...