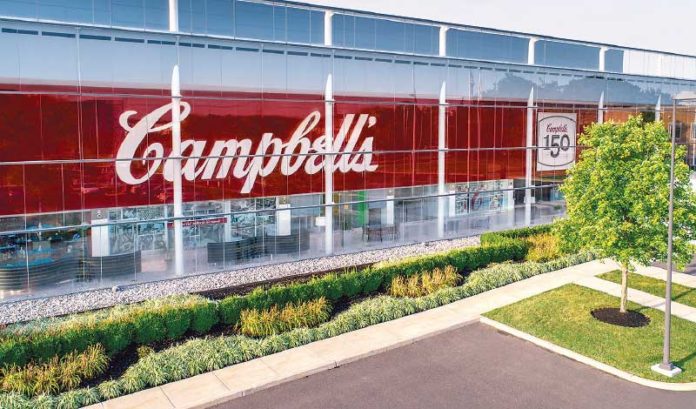 Campbell Soup Co. plans to invest $50 million into its headquarters in Camden beginning in March to drive greater creativity, collaboration and career development, as well as to accommodate more than 1,600 employees that will now be located on its renovated campus.

This will be the iconic company’s first major investment in the Camden campus since 2010.

In a Wednesday announcement, the company said that it also plans to consolidate its Snacks offices in Charlotte, North Carolina, and Norwalk, Connecticut, into the Camden headquarters, which entails having 330 roles move to the city.

The building closings will not impact Campbell’s other operations in Connecticut and North Carolina.

The Snacks and Meals & Beverages divisions will each have distinct sections of the campus. Construction plans include upgrading existing space and constructing new buildings, including a new campus center and a Snacks research & development center and pilot plant. It also plans to enhance workspaces, meeting and multipurpose rooms, and communal spaces to support a wide variety of work styles. There will also be a wide array of new amenities, such as on-site day care, a café, complimentary health and fitness center and a variety of other services.

“We are thrilled to invest in our people, our facilities and our Camden community, which Campbell has called home for more than 150 years,” Campbell’s CEO and President Mark Clouse stated. “We remain committed to our two-division operating model and are confident that being together in one headquarters is the best way for us to continue building a culture that unlocks our full growth potential. This investment will ensure Campbell remains a great place to work and a compelling destination for top talent.”

The company that is famous for its “Mmm Mmm Good!” soups said its goal is to “create a contemporary work environment that fosters connectivity and faster decision-making.”

“Campbell is an iconic New Jersey company, and I’m pleased with their commitment to invest and grow in our state,” said New Jersey Gov. Phil Murphy. “This plan will create jobs, stimulate economic development and strengthen Campbell’s roots in Camden, where their efforts have played an essential role in the continued transformation of the city.”

Camden has played home to Campbell since 1869, and the company has been at its current location since 1957, when the corporate headquarters was moved roughly one mile from the original manufacturing plant.

Campbell said it has been evaluating plans to unify its Snacks headquarters following the acquisition of Snyder’s-Lance Inc. in 2018. The division currently operates across multiple office locations, mainly split between Camden, Charlotte and Norwalk.

The company determined that investing in Camden and unifying most of the company’s office-based employees in one location provides the greatest benefits for the business and will provide the Snacks division with significantly improved facilities, resources and services than those that exist in Charlotte or Norwalk.

Team members in Charlotte and Norwalk will relocate to Camden in phases starting in mid-2023. For employees who choose not to relocate, Campbell will provide job placement support and severance benefits commensurate with level and years of service.