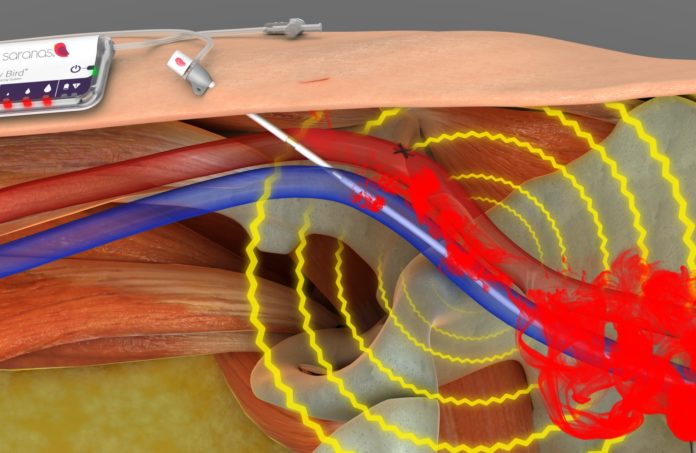 Deborah is the first to bring this new technology to South Jersey.

Certain minimally invasive procedures such as transcatheter aortic valve replacement, or insertion of the Impella or balloon pumps, require large-bore catheters inserted into the femoral artery for access.

The Early Bird is a small, venous sheath (catheter) embedded with an electronic tissue impedance monitoring system. This sheath is advanced into the femoral vein adjacent to the large bore arterial sheath to monitor for bleeding during the procedure, and up to 12 hours following the procedure.

“This is a great addition to our arsenal ensuring safe patient outcomes,” Dr. Richard Kovach, chair of interventional cardiology at Deborah Heart and Lung Center, said. “Although we routinely perform complex endovascular and minimally invasive procedures with large-bore access in our hybrid operating room and catheterization laboratories, procedure-related bleeding always remains a potential complication. Early detection is critical in preventing a very small bleed from becoming a major complication.”

Kovach and Drs. Daniel Ice (interventional cardiologist) and Paul Burns (chair of cardiothoracic surgery) were the first to use this device.

Kovach added: “One in five patients who undergo a procedure requiring large-bore arterial access is at increased risk for post-procedure bleeding. This can occur quickly and may often not be clinically evident until a very large amount of blood has been lost. Not infrequently, by the time the bleeding has been discovered, the patient may have developed a very large hematoma, bleeding in the pelvis, or significant drop in blood pressure, requiring transfusion or vascular intervention and repair. Management of a large bleed may not only require urgent transfusion and aggressive management in an ICU setting, but typically also results in a significant increase in the length of hospital stay and can even have an impact on long-term mortality.”

The Early Bird sheath has a three-stage visual and auditory alarm system. The three stages correlate with small, medium and large bleeds. A stage I alarm correlates with fairly mild bleeding, which can be managed easily with prolonged manual compression. The obvious goal is to intervene before reaching stage II or stage III.

“Of the first three devices inserted at Deborah Heart and Lung Center, two generated a stage I alarm within one hour after the procedure, and both patients were easily and properly managed,” Dr. Kovach said. “It is obviously far better to discover a bleeding issue very early on, avoiding major bleeding complications and transfer back to the ICU, operating room or catheterization laboratory for more aggressive management.”

“We are thrilled to be able to offer this new technology to our patients. Anything we can do to improve outcomes and reduce risk is a win-win for all.”