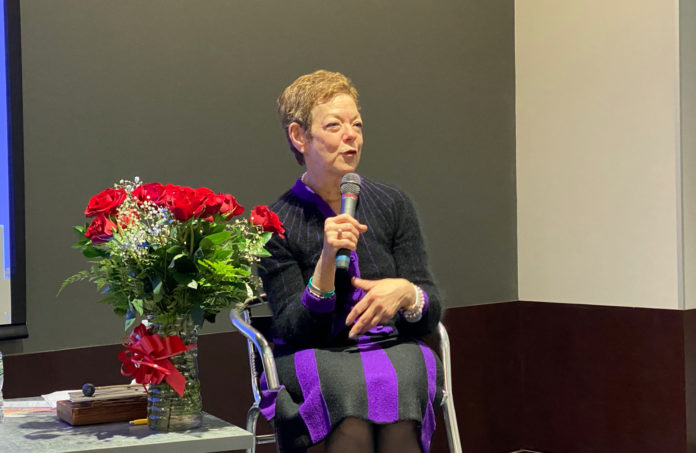 Like everyone else who spoke at the event honoring Sally Glick, Kate Conroy struggled to find just the right words.

And to keep her composure.

Conroy was on a roll — and doing her best to keep it together.

“What can you say about a woman who’s powerful, a force to be reckoned with, but who doesn’t need to show her power? Who can simply move through a room, connecting with people, happy to simply be there?

“What can you say: Thank you? It just feels too small.”

Conroy then seemingly spoke for the more than 100 people who filled the meeting room Wednesday morning — an event that everyone but Glick knew was being held to celebrate her.

“You taught me something,” Conroy said. “You made me better. So, I guess I’ll have to settle for: You changed me in the best way — irrevocably. Forever. And I’m so grateful.”

This was not a retirement party — Glick herself made sure to note that. And it wasn’t a eulogy, either, she joked.

The event was a moment by SobelCo to celebrate Glick as she moves to a new role at the firm: ambassador.

It became an appreciation — a moment to celebrate Glick’s other role: mentor and inspiration to women in business all over the state.

Marjorie Perry, the CEO of MZM Construction, started it off in a way only Perry can: straight to the point.

“I was one of her first recruits,” Perry told the crowd of their meeting back in 2005. “We were at our office in the conference room, and I stood up and said, ‘Listen, I’m a Black woman in construction and I need to figure out how to find a white man to help me build my business.’

“It’s my honor and my privilege to come this morning to tell you that you’re the most incredible woman I’ve ever met.”

Many others followed, in person — and on video vignettes.

Their stories detailed all of the ways Glick helped them grow as business leaders — and people.

Casey Gocel, a partner at Mandelbaum Barrett, told the crowd how Glick convinced her to share some of her personal struggles with a group of women in business.

“She convinced me to tell my most personal, deepest, darkest secret to a giant room full of strangers,” Gocel told the room. “It was a morning just like this one in January of 2019, almost exactly four years to today, when I stood in the front of this very room and I told my most personal story to a room filled with about 150 women.

“I was terrified, but that speech changed my life. Prior to that moment, I had no idea that my personal story and my struggles could help other women. Sally knew. And she convinced me to step out of my comfort zone. She convinced me that I can make a difference in the lives of other people — not just as an attorney, but as a working mom in an industry filled with men.

“I will never forget what it felt like to stand in front of this room and see all those women nodding at me, listening to me, accepting me — and the outpouring of support that followed and all the moments that I’ve shared with hundreds of women since that day. I owe that all to you. Because that’s what Sally does. She elevates women. She sees that thing inside each and every one of us that makes us unique and special. And then, she tells everyone.”

One by one, they came up to speak.

They used words such as mentor, friend, colleague, confidant, mom.

They talked about the unofficial competitions where women at an event would debate about who was better friends with Glick — or just how many people she actually knew.

They talked about how Glick not only worked to lift up women in the business world and their businesses — but entire sectors, too.

“There are so many things that Sally has done for us,” she said. “And No. 1 is treating nonprofits as a business, which we are — giving us respect and understanding, and really putting us out there as we should be.”

Picard said it only makes sense: Glick’s sense of serving matches that of nonprofits.

Susan Widmer, director of the New Jersey Export Assistance Center for the U.S. Department of Commerce, said Glick is just as great with government agencies. She credited Glick for helping to organize and plan the group’s upcoming event — its first.

Widmer was effusive in her praise.

“She has a mix of smarts, compassion and never-ending energy,” she told the crowd. “She basically just creates some magic wherever she goes. Too few people in the world today have this combination.

“That’s why so many people are here celebrate who she is, and not just what she’s accomplished.”

Of course, some of these acts of generosity come from her role at SobelCo. The firm wants to claim her, too.

Alan Sobel, the managing member of the firm, talked about the great impact Glick has had on the firm since the day she was hired in fall 2005. The best decision the then much smaller firm ever made, he said.

One it almost didn’t make.

“We couldn’t figure out how we could afford her,” he said. “So, we had a partner meeting, and we just went around the table, and someone said, ‘How can we not afford her?’

“I remember, specifically, my father saying to me: ‘Sally’s one of those people that everybody knows. She will be a tremendous asset to the firm, because she’ll introduce everybody to us.’”

Her impact, of course, is much greater — simply because of who she is.

“I want to share the transformation that Sally has made within the organization by bringing this passion to what she does,” he said.

If you love your work, it’s not work, LaForge said.

“It’s how you position yourself and how you go about your day to day,” he said. “If you look at it as work, it becomes work — you have to go in and find a passion. Our whole culture has taken a complete turn since Sally came aboard.”

Glick, always more comfortable in a supporting role, sat before the room and took in the compliments. She said she was a bit embarrassed by them, too. To her, she’s just being herself.

“I do what I do, and I don’t think about it as being anything extraordinary,” she said.

Glick did say she does feel lucky. To have been asked to come to New Jersey 20 years ago — and then to have found Sobel — is a blessing, she said.

“Finding Alan Sobel was the best thing that could have ever happened to me in my life,” she said. “This has been the most amazing experience to work with someone who says, do what you do best — we’ll pay the lunch bill.”

She closed with a heartfelt message for all of those who came to honor her.

“I’m actually the one that should be saying, ‘Thank you,’” she said. “You don’t know the secret of all of this: I get much more out of this than you do. I love that we’re friends.

“I’m so lucky that, honestly, I am embarrassed that you’re thanking me, because you’ve made this a wonderful life for me.”

A hero’s welcome: When was the last time you thanked a...

A gala at American Dream? Venue proving anything is possible