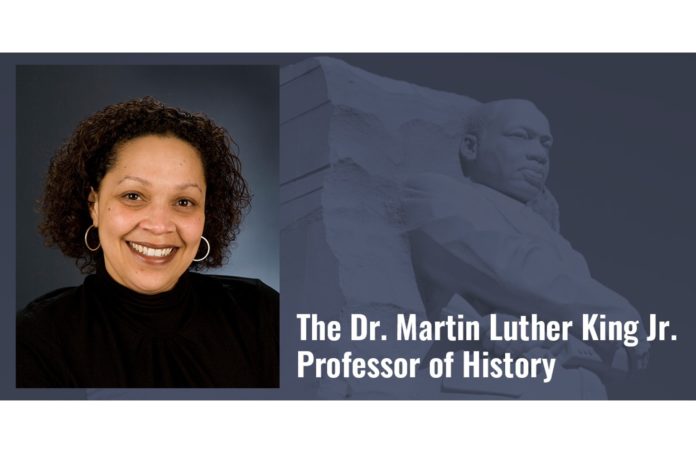 Leslie Alexander was a Stanford University sophomore when she took her first class in African American studies.

She had no idea it would change her life.

The course — taught by the noted scholar Sylvia Wynter — shocked Alexander with its unflinching look at the human suffering wrought by the Atlantic slave trade.

“I was completely riveted, captivated and, of course, traumatized by the stories she was telling,” Alexander said.

She was also inspired. And soon set out to become a historian.

She keeps the memory of that early classroom awakening close at hand.

“That’s one of the things I love about teaching: seeing the light bulb go off in someone’s eyes,” Alexander says. “I get to be part of the process of watching, helping and supporting students through a process of revelation.”

The Dr. Martin Luther King Jr. Professor of History was established in 1969 to honor the slain civil rights leader and to support the development at Rutgers of excellence in African American studies. Four faculty members have previously held the chair, including David Levering Lewis, who wrote his Pulitzer Prize-winning biography of W.E.B. DuBois while at Rutgers. The faculty position is part of the Department of History, School of Arts and Sciences.

“It carries a tremendous amount of significance because of the distinguished scholars who held this position before me, and because it’s named after one of the most famous champions of social justice this country has ever seen,” Alexander said. “In my mind, I would like to use this position as an opportunity to champion the type of scholarship that also reflects the same passionate commitment to social justice.”

She comes to the role at a particularly fraught moment in U.S. race history. The killings of George Floyd and Breonna Taylor by police in 2020 set off a reckoning that saw widespread demonstrations against police violence, the removal of some Confederate statues and new pressure on institutions to scrutinize their history and take steps to root out racism and support a culture of diversity & inclusion.

But a backlash has emerged: More than 20 states have adopted restrictive voting policies that could have disproportionate impact on voters of color; the Supreme Court is said to be poised to strike down race-conscious college admission policies; and a number of states have adopted or proposed legislation aimed at limiting teaching about race in public schools.