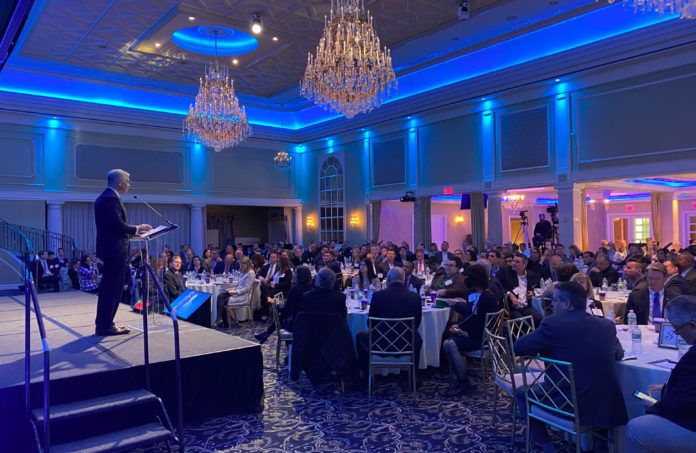 Patrick Harker, the CEO and president of the Federal Reserve Bank of Philadelphia, told an overflow crowd of bankers Friday morning that he anticipates more interest hikes are coming — but, he said he expects them to be much smaller, since he feels previous rate hikes have had a positive effect on the economy.

Harker, speaking to more than 400 at the annual economic program by the New Jersey Bankers Association at the Palace at Somerset Park in Somerset, told the crowd that his statements were his alone — and do not necessarily reflect those of anyone else on the Federal Open Market Committee or in the Federal Reserve System.

His words, though, obviously carry a lot of weight. Here’s what he said he sees coming:

“The Federal Reserve is absolutely committed to bringing inflation back to our 2% target, and we’re doing that by adjusting our monetary policy,” he said. “Last year, we raised the target for the federal funds rate to between 4.25% and 4.5%. That was a significant move, and a very fast one, given that we started the year at about 0%.

“I expect that we will raise rates a few more times this year, though, to my mind, the days of us raising them 75 basis points at a time have surely passed. In my view, hikes of 25 basis points will be appropriate going forward.”

The reason: The rate hikes are working, he said.

“At some point this year, I expect that the policy rate will be restrictive enough that we will hold rates in place to let monetary policy do its work,” he said. “We are also shrinking our balance sheet, which is removing a significant amount of accommodation in and of itself.”

Harker was somewhat upbeat in his assessment — which is to say he doesn’t foresee a huge economic downturn. But, he was quick to acknowledge the impact the current state of the economy has had on consumers.

“High inflation is a scourge, leading to economic inefficiencies and hurting Americans of limited means disproportionately,” he told the crowd. “I find it particularly disturbing that life’s true essentials like groceries, fuel and shelter have skyrocketed in price.”

Patrick Harker, CEO of the Federal Reserve Bank of Philadelphia, offered these thoughts on the future at the New Jersey Bankers Association event Friday:

“In happier news, we are finally starting to see steady progress bringing inflation down across an array of goods. With monetary policy doing its work, supply chains healing and excess demand running off, I forecast core inflation to come in at around 3.5% this year — well over our 2% target, but suggestive of clear movement in the right direction. Core inflation should fall to 2.5% in 2024 and then back down to 2% in 2025.

“GDP growth will be modest, but I’m not forecasting a recession. The labor markets are simply too hot to indicate a significant downturn at this point. I expect real GDP growth of about 1% this year before climbing back up to trend growth of about 2% in 2024 and 2025.

“Lastly, I do think we will see a very slight uptick in unemployment, probably topping out at about 4.5% this year, before falling back toward 4% over the next two years. It’s an underrated advantage that the Federal Reserve is taking on inflation from a position of such labor market strength.”

Harker addressed what the Fed can — and cannot —do.

“Our goal is to slow the economy modestly and to bring demand more in line with supply,” he said. “The Federal Reserve obviously can’t fix problems like supply chain issues, or an endemic shortage of workers, though it does seem like these problems are finally easing a bit. But we can affect demand by making it more expensive to borrow money. And that’s clearly already happening: We’re seeing unmistakable signs of a slowdown in the most interest-rate sensitive parts of the economy, like housing.

“What’s encouraging is that, even as we are raising rates, and seeing some signs that inflation is cooling, the national economy remains relatively healthy overall. In parts of 2022, the economy grew modestly even as we were tightening monetary policy substantially. Although inflation is biting, many Americans are still spending — even if they dip into their savings to do so.”

As for the impact on sectors?

“We’re seeing a healthy recovery in those sectors that suffered the most during the pandemic, like leisure and hospitality, while some sectors that built up healthy order books like manufacturing are cooling, somewhat,” he said. “I do remain concerned about commercial real estate, as the embrace of remote and hybrid work is clearly dampening demand for office space in central business districts and suburban office parks.”

All of this, of course, impacts unemployment — or the job market.

“I’m most pleased that the labor market remains in excellent shape,” he said. “Last year, the U.S. economy created 4.5 million jobs, and, while we are seeing scattered layoffs in certain segments like tech, there is little evidence of a major downturn in the job market. In fact, a record number of Americans are employed. And indeed, the national unemployment rate is exceptionally low at 3.5%.”

Harker ended his address with a notion of caution.

“The Federal Reserve is committed to bringing down inflation and to maintaining the conditions for a healthy labor market,” he said. “Given that you are bankers, I would also mention something I always keep in mind as a policymaker: When uncertainty abounds, it pays to be cautious.

“Just as I, as a member of the FOMC, am working to minimize risk, I also urge you all to think about the risks your clients face and to make good decisions to guard against any possible losses.”

Provident commits to elevate customer experience with hiring of Brady as...