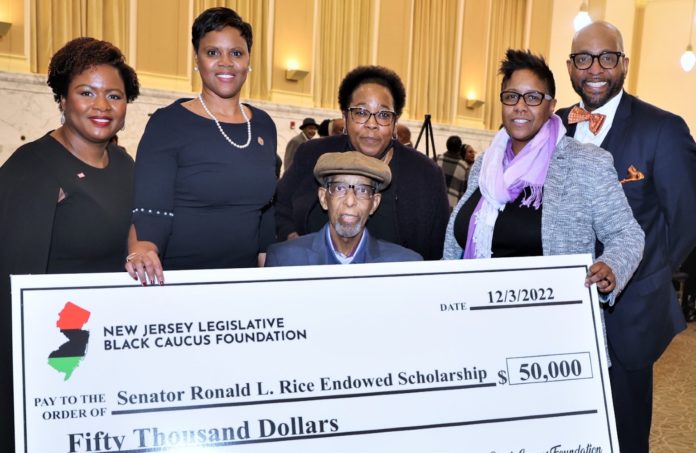 A former state senator and Rutgers University – Newark alumnus, Ronald Rice has been honored with an endowed scholarship at his alma mater. The powerful champion of fairness and opportunity, Rice’s scholarship will support undergraduate students in the School of Arts and Sciences and the School of Criminal Justice.

Rice was the longest-serving Black representative in the New Jersey Senate before announcing his retirement in August after 35 years.

The scholarship fund, endowed by the New Jersey Legislative Black Caucus Foundation, was established to uphold Rice’s legacy and his commitment to racial, social and criminal justice, according to the foundation. It will also commemorate his lifelong work to advance affordable health care and housing, tenants’ and employee rights, education, public service and the state’s urban communities.

“Sen. Ronald L. Rice is a figure who stands above policy and political expectations. HIs work speaks for itself, and its effects are felt and seen throughout the halls of our capitol and forever in New Jersey politics,’’ New Jersey Assemblywoman Shavonda Sumter (D-Paterson), co-chair of the foundation’s Ronald L. Rice Tribute Committee, said. “He has dedicated much of his life to being a public servant and advancing communities of color and those who have historically been disadvantaged.”

Dean Jacqueline Mattis of the School of Arts and Sciences said the school was proud to honor Rice’s commitment to eradicating inequality.

“We want to support and pay tribute to Sen. Rice’s particular legacy, which explored the complex interplay between economic justice, social justice and racial justice,’’ she said.

A former Newark police officer and detective, Rice served as a Marine sergeant and is a veteran of the Vietnam War. He later became a community organizer, Newark councilman and deputy mayor. As a state senator, he was known for his work advocating for racial justice, including the sponsorship of a bill that would allow municipalities to create civilian review boards and for demanding a study on racial bias in New Jersey’s criminal justice system. He was also chair of the NJLBC for many years.

“I truly can’t think of an alum more emblematic of Rutgers-Newark than Sen. Rice,” Chancellor Nancy Cantor said. “We are an anchor institution in Newark — striving always to do what it takes to cultivate the talent of today to be the leaders of tomorrow. Ron Rice embodies that perfectly, showing us what it means to cultivate one’s talents and put them to work for the public good.”