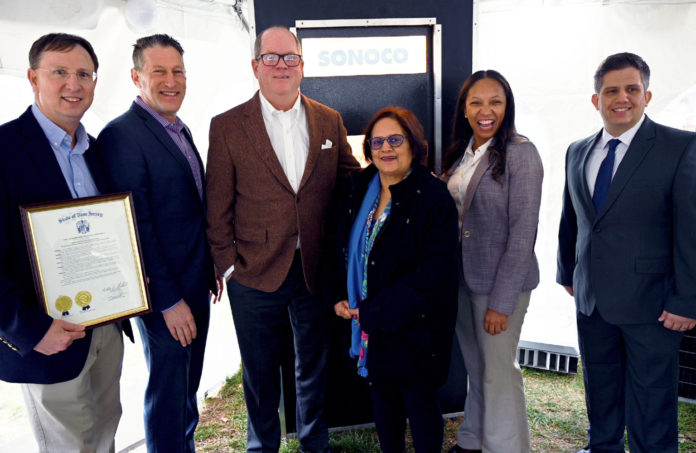 Sonoco last week “flipped the switch” on a new solar energy system provided by Novitium Energy that Sonoco officials said will produce approximately 1.295 million kilowatt-hours of electricity annually and meet 58% of the energy needs of its Dayton facility.

The new system, which was purchased by Sonoco, was provided by Novitium, which is based in Voorhees Township.

Over the 25-year lifespan of the system, the kilowatt-hours avoided via solar energy produced at Sonoco will eliminate greenhouse gas emissions equivalent to 10,235.6 metric tons of carbon dioxide; or, the equivalent of: 1.15 million gallons of gasoline consumed, 11.3 million pounds of coal burned and carbon sequestered by 169,245 trees grown from seedlings for 10 years, officials said.

Novitium CEO Jeremy Conner said the company was thrilled to be a part of the project.

“We are pleased to have collaborated with Sonoco,” he said. “Both of our organizations feel a deep sense of responsibility to serve our local communities, where many of our employees work and live, by leading the way with renewable technologies to meet the increasing demands of our environment.”

Elizabeth Rhue, Sonoco’s vice president of global environmental, sustainability and centralized technology, said the company was excited to celebrate the first of what she said were many planned investments in solar power across the company’s global network.

“We are thankful to Novitium, our local team and engineers who have been engaged in making this effort a success. This will bring Sonoco one step closer to meeting our emissions reduction goals,” she said.