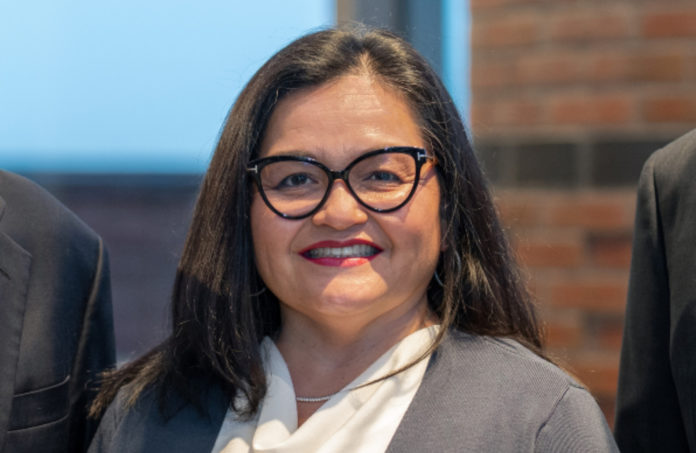 Shortly after Carmen Villar came to Merck in 2017 to serve as its vice president of social business innovation, she jumped at the chance to join the board of the New Jersey Performing Arts Center in Newark.

Villar, who joined NJPAC in 2018, knew it would be an opportunity to meet like-minded business and nonprofit leaders. More than that, she knew that arts institutions have an ability to affect community change like nothing else.

Whether it be an introduction to the arts for youngsters (something schools no longer are able to do in a way they once could), a reminder to school officials and adults of the importance of arts, to the potential jobs, Villar knew how much NJPAC could impact Newark, Essex County and the state.

Five years later, Villar was delighted to be elected to join Prudential CEO Charlie Lowrey as co-chairs of the NJPAC board — doing so during a post-pandemic time that presents unique opportunities and challenges for the state’s anchor cultural institution.

“What I love about NJPAC is the commitment to community and arts education,” she said. “NJPAC is opening its doors and actively bringing people in — whether it’s kids in schools, community members, business partners or volunteers at the grass roots level.

“It presents a little piece of culture that so many of us don’t often get anymore.”

“I remember growing up in school when we had PE every day, we had chorus once a week, we had the chance to learn an instrument or act in a play — we had opportunities to really stretch our brains and our talents, whether you have them or not in the arts,” she said. “A lot of schools don’t have things like that anymore. A lot of kids don’t get exposed to that anymore.”

“That little bit of exposure can make a huge difference in somebody’s life and development,” she said. “Whether they’re interested in the arts, or they just see somebody that looks like them up on stage doing something they haven’t seen before, that little bit of exposure can really ignite something inside an individual to go beyond what their current circumstances might be.”

As an executive at one of the leading pharma companies in the world and a former executive at the Centers for Disease Control and Prevention, Villar appreciates the recent emphasis that has been placed on developing STEM initiatives in schools. She said she also appreciates Rahway-based Merck’s longstanding commitment to supporting the arts — and the community in which the company is located.

Merck has been a major supporter of NJPAC since the day it was just a vision of former Gov. Tom Kean. Its former CEO, Roy Vagelos, has served as a co-chair previously.

Villar said it’s all part of the company’s ethos.

“We have two philosophic areas of priorities: community and health,” she said. “Obviously, we’re a health care company, that makes sense. But, on the community side, we really try to think about where we live and work, and how we can contribute to the enhancement of this society around us. And I think this is huge.

“We are a global company. We try to do this in other parts of the world as well. But obviously, our global headquarters is here — and this is where we need to take a very strong stance. I think NJPAC gives us the opportunity to not only talk about our beliefs, but to demonstrate our commitments.”

The commitment of NJPAC will be on full display in 2023. NJPAC hopes to break ground on the Cooperman Family Arts Education and Community Center, one of the centerpieces of the arts community it is creating around NJPAC, and Lionsgate Newark Studios in the South Ward of Newark.

The impact of these projects and others can be huge, Villar said.

“These places not only will provide opportunities for people to be exposed to the arts, but they also will create jobs,” she said.

Villar, who came to New Jersey from Atlanta, said she saw firsthand the economic benefits that came with the state’s growing film industry.

“Parents were able to get better jobs, which meant they were better able to provide all the things that their children need to be successful — from consistent housing to food on the table — which enabled them their children to open their minds to other things, like the arts,” she said.