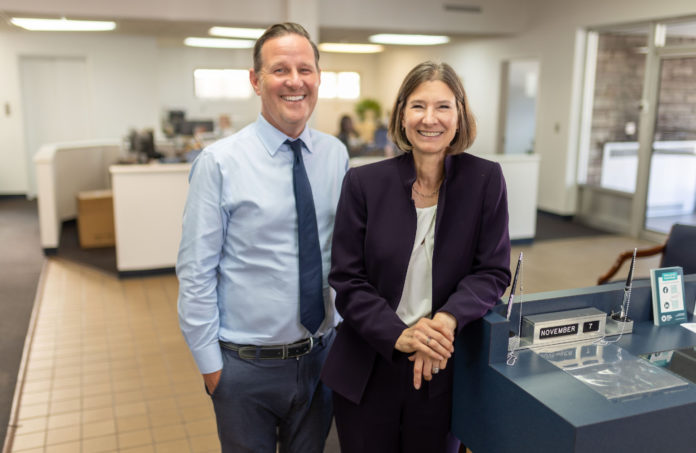 Chris McFadden, chief financial officer at Union County Savings Bank, spent much of her three-decade banking career being the only woman with a seat at the table.

And, at some low points, she said, she was only there to jot down everyone’s coffee order.

So, she finds some relief in the tables being turned. Joseph Yewaisis, chairman and CEO of the Elizabeth-based bank, isn’t there to fetch lattes, but he’s often the only man in the room when the bank’s leadership team meets.

That’s because, when this community bank was charged with suddenly employing a new management team following the recent retirement of most of its senior staff, the bank ended up choosing a nearly all-female group of senior level officials. Six of its eight main executives are women.

This small, locally-focused institution didn’t plan on breaking with the male-dominated norms of its industry’s past with its hiring. It just ended up doing so.

“I did not set out to become a woman-run bank, I want to be clear about that,” Yewaisis said. “But the fact is, among the candidates we interviewed, the best were women.”

Certainly, Yewaisis said he sees a value in recruiting in a way that creates a business reflective of the community it’s based in. So, the fact that almost half of the bank’s larger employee pool is diverse was more of a conscious decision. Three-fourths of roughly $2 billion bank’s 50-some employees are also female, matching the portion of women in the bank’s top roles.

Lucy Amicucci, chief community investment officer for the bank, one of the bank’s female executives, said that hiring diverse individuals in the upper echelons of a business can have a positive impact on a company’s culture. Those hired in positions beneath that C-suite are paying attention to who’s invited into positions above them, she added.

“No matter how diverse you try to make an organization, the most important thing is who’s at the top, making decisions,” she said. “Who actually has opportunities at the senior management level?”

Yewaisis added that sort of hiring approach for a business would also be meaningless if those senior staffers were muted when it came to decision-making.

“The great thing about having women in these roles is that they’re not afraid to say, ‘No,’” he said. “I get a lot of, ‘No, don’t do that — it’s a bad idea.’ And that’s the environment I wanted. Because I think, when it’s a lot of guys in the room, particularly from the generation above me, everyone was afraid to not agree with the boss out of fear of losing their job or being demoted. Instead, the best idea wins.”

McFadden, no doubt responsible for some of those “no” answers, agrees that the team brings a different perspective than might be present in different leadership situations — namely, the historically male-dominated boardrooms.

Even if banks such as this Elizabeth-based institution have made C-suite hiring decisions that avoid those situations, McFadden believes the industry around it has some ways to go. She can still find herself to be the only woman bank executive among the crowd at business conferences.

“I’m hoping that things continue to change and more progress is made there,” she said. “And I do believe that banking in 10 years from now is going to look entirely different than today.”

When it comes to attracting the right talent in a constrained labor market, professional services firms find there’s only one way to make it easy: Having potential workers feel good about the job they’re signing up for.

Sharon Rosen, vice president of human resources for public relations and marketing firm Antenna Group, said its business expanded from 70 employees to about 160 during a reported labor shortage. Competing for that much talent would’ve been an arduous task, if not for the “mission-driven business sectors” that the firm operates in, Rosen said.

“As I reflect on the past two years, what allowed us to stand apart was having a client base in sectors such as climate technology and health technology,” she said.

Especially as working from home has people closely identifying themselves with the jobs they do, Rosen added, workers have sometimes made job moves to companies that their values more directly align with. In Antenna’s interviews, candidates regularly convey their job search has pointed them toward companies where they believe they can make real-world changes.

“And, on our end, we’re incredibly intentional about messages we send out,” Rosen said. “We want prospects to know exactly where we stand when it comes to something like climate change and health care. And that we value kindness just as much as talent. That way, those responding are going to be aligned with our mission.”

Rosen admits that not every client is going to have its employees participating in earth-shattering, transformative work. And, at the same there, there’s varying levels of interest among job candidates in that sort of work — across all (even younger) demographics, she said.

But, in general, she’s found enough evidence that hiring is made easier when job posting can offer a common theme of social responsibility.

“Candidates now want to be part of something bigger,” she said. “They want to use their skills to make a real, tangible impact on the world around them.”

Did you know … Bankers and accountants do more than handle...