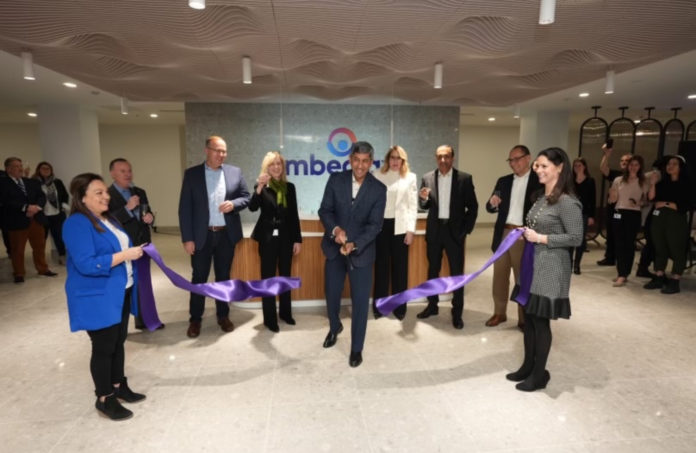 It’s the first question any CEO is asked after they cut the ribbon on a new corporate headquarters in New Jersey: Why here?

It’s not meant to have a positive or negative spin, but, rather, to better gain an understanding of the opportunities in the New Jersey market that would make a company — especially a billion-dollar spinoff such as Embecta — set up shop in the state.

Embecta, one of the leading pure-play diabetes companies in the world, broke away from Franklin Lakes-based BD on April 1, 2022.

CEO Dev Kurdikar said there were three reasons why the company selected Parsippany as its global headquarters — specifically, a state-of-the-art, 55,600-square-foot location at 300 Kimball Drive. The site will be home to members of the leadership team, global support functions and the North America commercial organization.

“For starters, we are rooted in BD and we are proud of the legacy that we have here,” he said.

“Secondly, we wanted a space we could make our own that would not cause immense dislocation to our employee base. I think all companies are struggling with getting people back in the office. So, any additional hurdle you add is a problem.”

Then, there’s No. 3: The state itself — and its rich history in life sciences and pharma, Kurdikar said.

“New Jersey has a great ecosystem of health care companies,” he said. “We are this unique company. We certainly are a medical device company, but the field that we are in, diabetes, has a lot of pharma and drug influence as well. And there’s certainly a lot of that here.”

The Morris County location brings one more benefit: a closeness to Newark Liberty International Airport, as well as Kennedy and La Guardia airports.

Embecta is a global company. Fewer than 10% of its more than 2,000 employees will work out of the headquarters — and more than half of the workforce is located outside of the U.S.

“Being in a place that’s easy for our European and Asian teams to come to — given the proximity to major international airports — makes all the sense in the world,” Kurdikar said.

Like all companies, Embecta is still figuring out how often its employees should be in the office. (A starting point is Wednesday — a company official said it is encouraging its employees to all be in on that day in a push toward collaboration.)

Whenever they do come to the office, they will find a modern look — a space that has few offices and nearly two dozen meeting rooms. There is individual seating for as many at 125, but those desks are surrounded by open-space, high-top seating areas, couches, comfortable chairs, a dining area and, most of all, space.

Kurdikar said this was all by design.

“Studies show the space you are in affects the way you think,” he said. “This office is built differently. We really wanted this space to be one where people can get together and collaborate, not get together and be stuck in their offices.”

Kurdikar discussed all this and more with ROI-NJ after the ribbon-cutting ceremony Wednesday. Here’s a look at more of the conversation, edited for space and clarity. 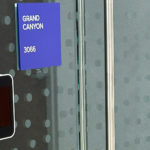 All of the conference rooms at Embecta’s new global headquarters in Parsippany are named after national parks. The reason: It’s the least controversial potential category of names.

Countries, colors, cities, celebrities all have the potential to offend someone. Everyone is good with national parks, a company spokesperson said.

ROI-NJ: New Jersey has a rich history in bio and life sciences — we all know the medicine chest line. But other areas, namely Boston and Silicon Valley, are hoping to become pharma’s new address. Why here over there?

Dev Kurdikar: We have an office in Boston. And, I think Boston is the right place to have our product development headquarters. As for San Francisco, we would have to hire a whole new employee base there — why would we want to? And that would mean a different culture.

I often tell people: It’s not where we are, it’s how we work that’s going to make a difference.

ROI: Talk about Embecta. You certainly are one of the leading diabetes companies in the world — with a history no one can match. Talk about your role in battling one of the biggest health issues of our time?

DK: It’s now been 100 years since insulin was first used to treat diabetes, at the University of Toronto. We made the first specialized insulin syringe in 1924. So, we’re a new company with a 100-year-old business. And we’re proud of that.

If you think about then and now, just imagine the impact that this business has had. People were dying before insulin. This has allowed children and adults to actually live, and live with diabetes, versus die from diabetes.

These things matter for somebody who has to inject themselves four or five or six times a day for the rest of their life. Our business has been on the forefront of helping them by innovating insulin delivery.

ROI: The number of people diagnosed with diabetes is skyrocketing. Talk about that growth and how Embecta will grow to handle it?

DK: We have approximately 500 million people around the world that have diabetes. That number is projected to go up another 250 million over the next five years — and a lot of that growth is going to be in emerging markets. We have a strong presence in emerging markets, more than half of our commercial workforce is outside the U.S.

For a company of our size to have almost half of our revenue come from outside the U.S. is pretty unique. We have this platform of great brand recognition and trust that we’ve earned over a century. Now that we are our own independent company, we’re not competing with other divisions. We can really chart our own destiny.

DK: In the U.S., there has been adoption of new drugs and technology. We’re developing a product that we feel can automate insulin delivery. But, if you go outside the U.S., there are many places where people are still struggling to get diagnosed, people are still struggling to get insulin. That’s the basic injection delivery market. And we are well-positioned to help there.

What we want to do is progress toward bringing new innovations to market. That’s the high-tech side with the patch pump we’re developing, but also products more appropriate for emerging markets. We have the capability to really serve both sides of the spectrum. And we’re looking for M&A and business development opportunities, too.

ROI: All of this is made easier by being a standalone company. Talk about the decision to separate Embecta from BD.

DK: BD is a 125-year-old company, but, over the last decade, it’s gone through a pretty big transformation itself (through acquisitions). Their business and our business had become fundamentally different in the kinds of products we make and where they are distributed.

When BD looked at its portfolio of businesses, it had become clear that this was not a business that was going to get a lot of management attention nor capital investment, because they had these other businesses that they wanted to invest in. However, this business was stable, had growth and was very profitable. And this is a very attractive market because there is a lot of unmet need.

The thesis was that, if you separate us, and let the business decide what it wants to do with the cash it generates, it will create value for its shareholders — which, at the time of the spinoff, were all BD shareholders.

ROI: You’re a new company with a 100-year history. That’s a great tagline. Let’s talk about how Embecta will start making its own history: What do you hope the company will look like a year from now?

DK: It’s important that you picked a year from now, because what we’re in the middle of is a lot of separation work. You can imagine what it’s like to be on your own after being part of another business for almost 100 years. We had to set up our own IT systems. We have to put in our own enterprise resource planning system. We have to put in our own distribution system.

And we had to get our own office — and offices like this all around the world.  This is just one office. We are not done with facilities.

It’s really interesting; there is a lot of separation work in something like this. People don’t think about things like this, but this is the first month all our U.S. employees are getting paid via Embecta systems and payrolls. In December, they were getting paid through BD systems and payrolls. And this is the first month we are now all on Embecta benefits. Until December, we were on BD benefits.

We are focused on getting all of that done — while doing the other things we talked about. So, a year from now, I hope we will be talking about our five-year growth plan, which would include a discussion of new products.