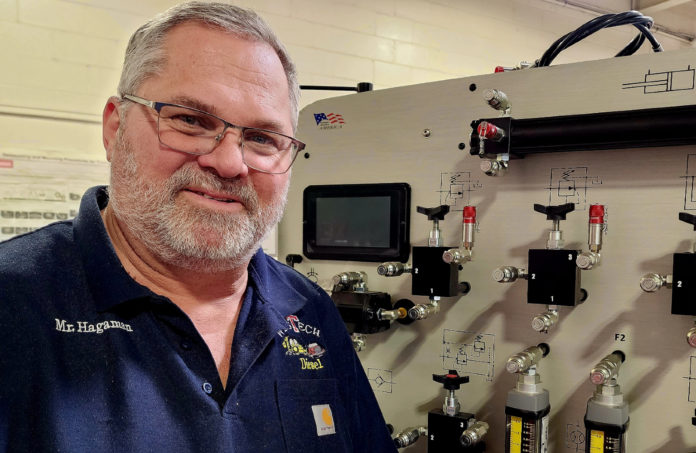 When gauging areas of employment that might be speeding up, vocational school teacher Daniel Hagaman can only describe transportation-related industries as putting to shame the job market he was once introduced to.

“Honestly, I wish I had all these opportunities 42 years ago, when I was starting off in this career,” he said.

Vocational schools training the next generation of automotive and diesel technicians believe the job market for these careers is only revving up. The students are more interested; the industry is more interested. Hence why these schools have started to pour resources into the work they do to build out the employment pipeline.

“Wages, of course, depend a lot upon the market, but we have plenty of technicians, who, if they’re good, can make very, very good money,” she said. “It’s competitive to a lot of other professional careers. And I can’t speak to every company, but we offer outstanding benefits, (including) health and wellness, stock purchase plans and 401(k) matching programs.”

The U.S. Bureau of Labor Statistics puts the highest 10% of earners in a job such as diesel technician at more than $76,150. Between those roles and automotive technicians and maintenance jobs, the number hangs at around $50,000 — still higher than some other emerging skill trades, such as solar panel technicians.

Adams adds that these roles are accompanied by more chances for career advancement than might have been appreciated in the past.

“Being a technician is not a dead end,” she said. “There’s plenty of opportunities for these professionals to grow their career.”

Despite that, Adams said the business, like many others in the sector, has experienced a shortage of technicians due to the attrition of an aging workforce. Technicians are retiring en masse, and the next generation of workers hasn’t yet risen to an equivalent level of replacements.

“For us, as an employer with 300 stores across the country, that means we have to work closely with vocational schools and do everything we can to attract people to the business,” she said. “We’re also making sure we’re trying to train people from within.”

Across the country’s automotive trade footprint, Shawn Alexander, president of the Bloomfield campus of Universal Technical Institute, a nationwide provider of technical education, said New Jersey’s wages rank among the highest. Given that, industry leaders feel they have a compelling case to make for young individuals pondering potential career paths.

There’s also a potentially enticing technology angle to the work today — and, especially, what the work is expected to involve tomorrow. Alexander said the future of self-driving and electric vehicles have brought new interest in the industry.

He added that, for better or worse, it’s also clearing the way for the next generation of automotive tradespeople, as older workers choose to retire ahead of the need for additional training in these advanced technologies.

Hagaman, in his role as diesel and heavy equipment instructor at the high school and postsecondary institution Burlington County Institute of Technology, has seen it all come together to ignite interest among younger individuals.

It’s hard for any amount of capacity at educational centers to match demand right now on the industry side, because factories multiplying in the region — with Amazon being a major contributor to that — has so accelerated the hiring of trucking industry professionals, Hagaman said.

Still, the local automotive and diesel program Hagaman is involved with, which he was recruited to help run just over three years ago in response to that swelling demand from local industry, is expanding, thanks to a grant awarded last year. The funding is through the 2018-introduced Securing Our Children’s Future Bond Act.

Through regular advisory meetings, schools such as Burlington County Institute of Technology hear from freightliner companies what they’re looking for in the industry’s talent pipeline.

Most of all, they want young professionals — and lots of them.

“At a lot of these career fairs I’ve been to, what I’ve heard often is that companies want the kids right out of high school,” Hagaman said. “They want to be able to mold them into the workers they want them to be in their field. Because all these companies have their own program.”

Alexander said his school’s 51-week program provides credentialing that sets students up for work in companies such as Ford Motors.

The growth of educational programs that provide a pipeline to automotive companies has taken on a new significance, with the BLS projecting that there will be about 73,300 job openings annually for the industry’s technicians until at least 2031.

But it’s not just the automotive sector, Alexander said. There’s a surge of demand in skilled trades across the board.

Hagaman and Alexander both articulated that, although it has been acknowledged in recent years to a degree, there needs to be a further reevaluation of the young individuals pushed toward college versus vocational institutions.

“I don’t know if you’ve tried to get anyone to provide service for you in a home as of late, whether it’s an electrician, plumber or another trade, but it’s near impossible to find someone to come out because they’re so busy,” Alexander said. “So, I look at where we are today and think, where are we going to be in 5 or 10 years when that group that’s nearly ready to retire does retire?”